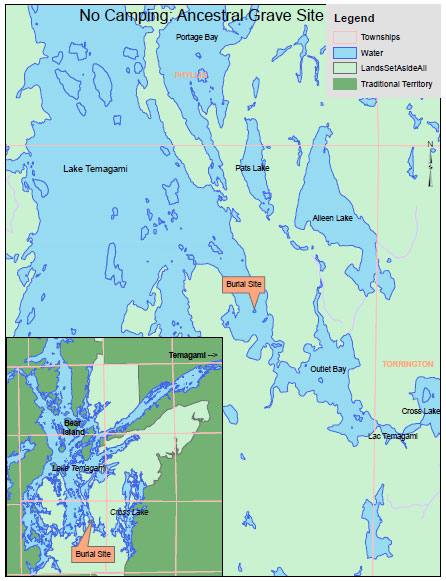 On Saturday July 6, 2013, a grave was inadvertently uncovered by campers. According to the pathologist report, the person was an Anishnabai-Kwe (native woman) between the ages of 10 – 20, who would have been interred around the turn of the last century.

On July 10, 2013, a pipe ceremony was conducted and she was re-interred on site.
Under the authority of Section 28 (1) of the Public Lands Act (RSO, 1990), at Island 895, Lake Temagami, the Ministry of Natural Resources authorized and erected four (4) NO TRESPASSING and five (5) NO CAMPING signs.

Despite the no camping and trespassing signs, both houseboats and campers continue to use the site. We are requesting your assistance to create awareness amongst your residents and patrons about the no camping signs and their purpose, as well as to gain their cooperation.

Temagami First Nation has laid a concrete slab over the grave and has clearly indicated that it is a “Grave.”

With everyone’s cooperation, we trust that this grave site will not be disturbed again in the future.

Thanking you in advance for your anticipated cooperation.